Today we see many standing against bullying, and rightfully so. The anti-bullying campaign is 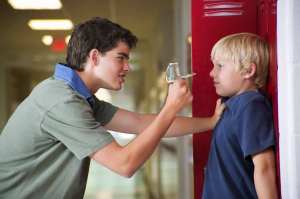 a growing voice whose goal is to stop those that find joy in intimidating, controlling, and hurting others. It seems like every week I see an article about another person being bullied at school, work, or in their neighborhood. The articles are either recounting the horror experienced by the one that was bullied and/or calling people to action against this real and present danger in our society.

Bullying is not new. When I was a kid bullying was very common. Always being a bit smaller than the rest, I was usually the one being pushed around. The only thing that saved me from being a high target was my ability to hold my own in sports. I was not the best player in sports, but I could play well enough to earn the respect of the better players, who often were the bullies themselves or had the ability to protect me from them. Being in the «in crowd» was the trick. I never made it in that crowd, but I was high enough on the totem pole at school that I normally flied below the radar of the bullies. I also had a large group of friends, so like in a school of fish, the target normally was not on my back.

But what about those who do not have many friends and are not necessarily good at sports or any other popular activity? What happens to them? There is no better way to say it, they run for their lives, living in fear of the predators that seek to destroy the lives of the weak. Looking back, I now ask myself, why I was not bold, courageous, and kind enough to help those being bullied. But if I would have done so, it would have meant social suicide, putting myself in harms way, and I was not ready to do that. It is sad really. Knowing what I know now, if I could go back in time, I would live so differently by taking risks to help those that needed it, and standing up to those who oppressed others.

Consider Jesus. He risked His reputation, social status, and even His life in order to care for the outcast, save the sinner, and oppose the arrogant. He valued people more than He did His own life. His actions were not determined by how people would perceive Him, or receive His message. He functioned on a clear set of principles. Love others because every person is uniquely created by God, in the image of God, and should be treasured as His special creation. All that He did was founded upon the reality of the existence of God, and the truth that all things were created by Him. Jesus cared for people because He was the one that created them (Colossians 1:15-16).

This is what confuses me about the anti-bullying campaign. This campaign is mainly supported and promoted by the local school systems. But, these same school systems teach that people evolved from billions of years of natural selection. Natural selection is nothing more than a non-violent way to say that we are the product of bullying. Evolution teaches that what we see and experience today is the product of the strong in our world taking advantage of and doing away with the weak and vulnerable. The strong survive, which according to natural selection, is necessary if our world is to advance. Kill the weak so the strong can prosper.

So how can a school system, which teaches its students that for billions of years bullying was the norm and even essential for the survival of living things, is now, all of a sudden, not the way kids are suppose to act and behave? The morals of evolution are the strong rule, the weak die, and morals do not exist.

«In a universe of blind forces and genetic replication, some people are going to get hurt, other people are going to get lucky, and your won’t find any rhyme of reason in it, nor any justice. The universe we observe has precisely the properties we should expect if there is, at the bottom, no design, no purpose, no evil, and no other good. Nothing but blind, pitiless indifference. DNA neither knows nor cares. DNA just is. And we dance to its music.»

But, in teaching all this, they turn against their own teaching and campaign against bullying, which is to care for the weak, outcast, and marginalized. They promote natural selection, yet call bullying evil. What I see is a mixed message.

See, standing against bullying is fundamentally a biblical message, rooted in the fact that there is a Creator, and all His creation is important, especially humans, who are created in His image. The anti-bullying agenda is based upon the fact that people are valuable, which is a foreign idea in evolution. Yet school systems try to teach both. Why do they do that I ask? If they are so convinced that we evolved through billions of years of unguided natural selection, why opt for a creation based argument when it comes to bullying? Why say and teach that God does not exist, and then use biblically based arguments to preach anti-bullying? My reasoning is simple. First, most do not see the conflict. But, even deeper than that, our culture today wants to live like there is no God, which is an evolutionary promoted concept. They want to make their own rules, and live their own lives without someone telling them what is right or wrong. They want to determine that for themselves. But, deep down inside, they know bullying is wrong. Because they are created in the image of God, people cannot fully and totally live without their heart and conscience telling them that life is precious and must be protected. While their heads tell them to believe evolution, their hearts tell to believe in the principles of God. Therefore, what is being taught in our schools is a mixed message.

Some might argue that we are to care for those bullied because this is best for our society, and thus moves us along the evolutionary chain. Some might argue that the anti-bullying campaign is apart of us evolving.. But, I would respond that, if we honestly apply evolutionary teaching in our schools and in our world, the product can only be violence, abuse, and oppression. The anti-bullying movement promotes that each individual person matters, deserves respect, and must be defended. This is not an evolutionary concept, but one built on creation. In evolution, the individual does not matter, only the society as a whole. So in order to change the anti-bullying message into one based in evolution it must not stand against bullying because it is evil, and the person being insulted, intimated, and abused is special and important. That would equate bullying as a moral evil, which pure elocutionist teaching completely denies exists. It would have to promote bullying only as anti-beneficial for society, so it should be stopped.

What would this evolutionary-based message say to the person being bullied? It would say, «Sorry you are being bullied, not because you, as a person, actually matter or have any real personal value. But we are sorry only because we as a society cannot fully evolve as long as people are being bullied.» If the school systems are so convinced that evolution is true, why don’t the anti-bullying campaign use this reasoning. For a very clear and simple reason. That message does not speak to the heart of anyone because we want to know, feel, and live as though we are special and have value.Our God-given consciences tell us this is so. To not have value is to not have purpose. To not have purpose is the most depressive feeling a person can have.

Each individual does have value. That is why we are to defend those bullied. It is a biblical concept based upon the truth that God is Creator and He has created each person special (Psalm 139:13-14) and He wants His people defending the weak, for He is their Defender (Isaiah 40:28-31). That is a message that evolution does not teach, nor encourages. Actually, is opposes it. This is just another reason why I think people should reject the lies of evolution and place their trust in the Lord Jesus Christ, the Creator of all things. This also is another reason why I embrace joyfully the truth of creation.

I am against bullying because I believe in God, who created all people in His image. All people have value. Promoters of evolution cannot say the same thing and hold true to their faith in natural selection. In evolutionary thinking, there simply is no reason to actually care for the weak, outcast, and rejected the way Jesus did. It does not allow space for them. Praise be to God, He does!