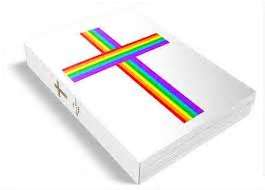 With all the rising talk on this issue, I knew it was only a matter of time before I would write on it. I hope to preach on it as well in the coming months. Why? I can think of a couple of reasons. First, it is important that the Christian church know the biblical stance on homosexuality and not be ashamed to share it in love. Second, I find there is a HUGE misconception by the non-believing world on what the biblical stance is and why the Christian church must stand where it stands. This misconception is due to probably at least three things. One, the non-believing world not wanting to hear God’s truth on the subject. Two, the Christian church doing a poor job in voicing their stance. And three, the media promoting mostly the side of the church that is doing a poor job in voicing their stance.

I entitled this post “The Christian View…” simply because there is only one biblical view when it comes to homosexuality. Myriads of people have tried to come up with more views, but in order to do that, you have to ignore the clear biblical texts that speak about it. To ignore those texts is not to form another Christian view, but to act non-Christianly and violate what God has said.

So I wanted to begin by stating some false beliefs believed by the non-Christian world when it comes to the issue of homosexuality. Then I want to answer those false beliefs.

False Belief #1 – Christians hate those that practice homosexuality because the Bible commands it.

In other words, “God hates gays, so His followers should too”. This is a false belief. If this were so, then why does Scripture say,

“For God so loved the world, that he gave his only Son, that whoever believes in him should not perish but have eternal life. – John 3:16

The ultimate demonstration of love is dying for someone. God sent His Son Jesus to die for sinners, including those who practice homosexuality.

Christians are not to hate those who practice homosexuality. If they do, then they are not walking properly in their faith. But, as believers in God, we must stand where He stands. Homosexual practice goes against His creative and divine will. I will address more of this thought below.

False Belief #2 – Since Jesus never specifically condemns homosexual practice, then He was not against it.

This is a faulty argument. There are many things Jesus did not specifically condemn. He never mentioned child pornography, but few would argue that Jesus would be OK with that.

In the New Testament, Jesus often refers to the Old Testament. He quotes Genesis, as well as the other writings of Moses, as well as many other books in the Old Testament. Jesus treats those writings as Scripture, God’s word. In Genesis, there is a clear biblical condemnation of the cities of Sodom and Gomorrah, whose people, among other things, practiced homosexuality. By Jesus quoting Genesis without hesitation, He shows that He agrees with the book as a whole. This line of thought also works for the book of Leviticus, which I discuss below. While He may have never said the word “homosexuality” He was in agreement with the books of the Bible that did.

False Belief #3 – The Bible does not condemn the practice of homosexuality. Christians have misinterpreted it.

Why does it violate His will? Simple. He created and designed sexual intimacy to be in the context of marriage, and marriage to be between a man and a woman. Genesis 2, at the very beginning of the Bible, clearly points this out.

Therefore a man shall leave his father and his mother and hold fast to his wife, and they shall become one flesh.  – Genesis 2:24

From the very beginning, God made this union to be between a man and a woman. The “one flesh” is clearly a reference to sexual intimacy, and to “hold fast” (sometimes translated “cling”) is a word that gives a picture of glue. While the Bible does mention many people in the Old Testament that practiced polygamy, Genesis 2 clearly shows that it was not part of God’s original plan for marriage. One cannot properly “hold fast” to more than one wife. What is neat about the Genesis 2 verse is that Jesus in the New Testament refers to Genesis 2:24 as God’s plan for marriage (Matthew 19:5; Mark 10:7). Paul also reaffirms this view in Ephesians 5:31, where he quotes again Genesis 2:24.

Referring to the word “one flesh” in Genesis 2:24:

“Homosexual behavior is a direct assault on a male/female requirement.” – Robert Gagnon, The Bible and Homosexual Practice: Text and Hermeneutics.

But there are other passages that deal with homosexual practice. Here they are:

You shall not lie with a male as with a woman; it is an abomination.  – Leviticus 18:22

Now some reject this verse because it comes from the Old Testament law and they would argue that in the New Testament Jesus frees us from the law. But this is the result of not understanding what the New Testament means when it teaches that we are free from the law. Because of the crucifixion and resurrection of Jesus Christ, believers in Him are free from having to uphold the righteous requirements of the law, for Jesus fulfilled it for us. Reading Romains 1-8 and the book of Galatians clearly show this. But this freedom does not change God’s moral character. He is just as holy in the New Testament as He was in the Old Testament. Leviticus 18:22 is a reflection of His moral character. Homosexual practice is a perversion of His moral character because it seeks to change His original creative plan for sex and marriage. According to Leviticus 18, homosexual practice ranks on the same level as having sex with an animal (v.23), for both violate God’s creative order. Leviticus 20:13 also shows the same, but with the legal repercussions that Israel was to uphold if one was caught practicing homosexuality. The legal system is different in our country today, but the moral demands of God have not.

26 For this reason God gave them up to dishonorable passions. For their women exchanged natural relations for those that are contrary to nature; 27 and the men likewise gave up natural relations with women and were consumed with passion for one another, men committing shameless acts with men and receiving in themselves the due penalty for their error. – Romans 1:26-27

Due to the rebellion of mankind against God and His revealed will (suppressing His truth v.18 & exchanging the truth of God for a lie v.25), God’s wrath is experienced by Him giving mankind over to “dishonorable passions.” One of these dishonorable passions includes the practice of homosexuality.

9 Or do you not know that the unrighteous will not inherit the kingdom of God? Do not be deceived: neither the sexually immoral, nor idolaters, nor adulterers, nor men who practice homosexuality, 10 nor thieves, nor the greedy, nor drunkards, nor revilers, nor swindlers will inherit the kingdom of God. 11 And such were some of you. But you were washed, you were sanctified, you were justified in the name of the Lord Jesus Christ and by the Spirit of our God. – 1 Corinthians 6:9-11

This passage clearly shows that one who places their faith in Jesus will cease to practice things that displease God, and one of those things is the practice of homosexual acts.

8 Now we know that the law is good, if one uses it lawfully, 9 understanding this, that the law is not laid down for the just but for the lawless and disobedient, for the ungodly and sinners, for the unholy and profane, for those who strike their fathers and mothers, for murderers, 10 the sexually immoral, men who practice homosexuality, enslavers, liars, perjurers, and whatever else is contrary to sound doctrine, 11 in accordance with the gospel of the glory of the blessed God with which I have been entrusted. – 1 Timothy 1:8-11

The point I want to show in this passage is that by exposing God’s will and word on sin, like homosexual practice, will hopefully help those caught in sin be freed from it, and turn to Jesus, their only hope of salvation. If those that practice homosexuality see that it displeases God, then God can use it to show them His love for them and that if they will repent of their sin, He will cleanse them from their sin and accept them as one of His beloved children. This leads me to the last false belief that I will write about in this post.

This is simply not true. The message of the church of the living God is not about hating a group of people or condemning a group of people. If it was not for Jesus offering us salvation we would all be condemned (John 3:18). When Christians properly share the good news of Jesus to those who practice homosexuality, they are seeking to offer a way out to those trapped in sin. The message of the Bible is a message of hope & restoration. Christians are on a rescue mission. We are not the saviors, but we want to share to others about the Savior, Jesus Christ. Salvation does not come by changing the message of the Bible to fit the lives of people, but calling people to accept Jesus and letting Him conform their lives to Him and His will.

We are not angry. We were once people who walked in darkness until God out of His grace saved us from our rebellion (Ephesians 2:1-4). It was then we were angry. We were angry at God. But God, who is rich in mercy (Ephesians 2:4) washed us, sanctified us, and justified us in the name of Jesus Christ our Lord and the Spirit of our God (1 Corinthians 6:11 – see above).

We want others, including those who practice homosexuality, to be saved from sin like we have. It not a message of “be like us” rather one of “look to Jesus.” The message of the Christian church is one of love, not condemnation. When we say that homosexuality is a sin, we do so in order to show love to people. For God is love (1 John 4:16). We share God’s displeasure for homosexuality because we want what is best for others, and their joy. For one to be unmoved in their approval of homosexuality means that they reject the love of God and find themselves outside of His saving grace. This is truly a scary and dreadful place to be. I once was there, but thanks be to God, He saved me from my stubborn pride. I once was lost, but now I’m found. Once blind, but now I see. I Praise Him for that!

2 thoughts on “The Christian View On Homosexuality”