“Now faith is the assurance of things hoped for, the conviction of things not seen.” – Hebrews 11:1 (ESV) 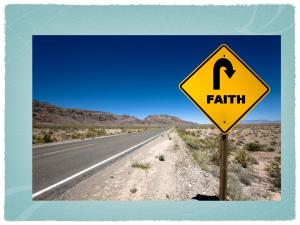 Hebrews 11 is a relatively famous chapter in the New Testament. In this chapter, the writer lists numerous examples of people who had faith in God. Often when we read about these people we imagine them as super spiritual saints. Yet, when you read about their life in the Old Testament, you see that they were simple ordinary people that believed what God said and adjusted their lives to His words. They made their share of mistakes, but at the end of their life the writer of Hebrews could say that these Old Testament examples walked by faith.

What does it mean to have faith? What is faith? I’m not talking about faith like the demons have (see James chapter 2). I mean real faith that gives eternal life. The faith taught in the new testament that comes from God. Why do I want to answer this question? Simple. “And without faith it is impossible to please him (God).” Hebrews 11:6 (ESV). I desire to live my life by faith so as to please God.

In Hebrews 11 there are numerous examples of how God’s people walked by faith. By faith Abel offered to God an acceptable sacrifice (v.4). By faith Enoch walked with God (Hebrews 11: 5; Genesis 5:22-24). By faith Noah built an ark (v.7). By faith Abram moved to another country (v.8-10). By faith Sarah conceived a son in her old age (v.11-12). By faith Abraham was willing to offer up his son Isaac as a sacrifice to God, only to be saved from doing so at the last minute. (v.17-20). By faith the people of Israel crossed the Red Sea (v.29). By faith Rahab did not die with her people because she welcomed Israel spies and protected them (v.31).

Why mention all of these? Simple. All these people, and many others mentioned in Hebrews 11 adjusted (changed) their lives either by what God Himself told them or by what they knew to be true about Him. In other words, their faith led to action (life).
So what I want to do is to look at three different descriptions of faith. First, where does it begin. Second, some personal ways I have sought to walk in faith. And third, some ways that all believers should walk in faith.

WHERE DOES FAITH BEGIN?

Certainly it would be foolish for me to think that by myself, I could have the faith that could please God. I do not have to examine myself for long before I find dark and deep rooted sin in me. Any faith in me that I could produce would simply mock and degrade the holy and awesome God who created all things. So, where does faith come from? It comes from God. In His love and mercy, He sent His one and only Son, Jesus, to die on a cross as the punishment for sin. God promised that any who would commit their lives to His Son would be forgiven of sin. So, faith must begin with Jesus by what He accomplished for us on the cross.

So, the person that claims to believe in God, but has not committed themselves to Jesus, God’s Son, might have faith like the demons (see comment above), but they certainly do not have faith that saves them to eternal life. But, once faith has begun in a person (commonly referred to as saving faith), then a life of faith can begin.

SOME PERSONAL WAYS I HAVE SOUGHT TO LIVE BY FAITH

By faith Isabelle and I decided it was best for our family for her to quit her paying job and come home to be a full-time worker at home. By faith I got a second job trusting that God could provide the financial resources and physical strength needed to trust Him. By faith, in 2003, Isabelle and I moved to North Carolina in order for me to finish my seminary. For the first seven months we had to pay for a house in Georgia that we were trying to sell while at the same time pay for an apartment where we lived in North Carolina. This whole time our only source of income what my part-time job at Target. By faith Isabelle and I moved to Rawdon, Quebec in August of 2004 in order to share the biblical Jesus to those who lived here and to see a church planted. By faith we decided to homeschool our children instead of placing them in a public or private school. By faith we built our home for our family 3 years ago that seemed like a project that was much bigger than we could take on.

Why do I mention all these things? Simple. They were decisions we made after seeking God through His word and prayer, and we are convinced that we were convicted to walk in these ways. Every single one of these decisions were made after seeking the will of God. They were not made out of emotional distress or guilt from legalism. They were made in faith. The principle is not that all Christians need to do exactly the same thing Isabelle and I did. The principle is that people of faith in God will look to Him for all things and seek Him for His will for their life. Then, they will do it. No matter the obstacles or cost. Isabelle and I have faced many obstacles and many costly decisions. But, every decision we have taken in faith has proved to draw us closer to God and more in love with Him. On the contrary, every decision we made apart from faith has proved to be unsatisfying.

SOME WAYS ALL BELIEVERS SHOULD WALK BY FAITH

Do all believers get all this right all the time? Absolutely not! But by faith we believe that if we confess our sins to God, that because He is just, He will forgive us our sins (because of the cross) and cleanse us from all unrighteousness. How do we know that? He promised it to us (1 John 1:9). That is what He said.

Therefore, the thrust of this post is that faith is responding to what God has said. Faith is not simply believing something exists. Faith is hearing God’s word (Romans 1:17) and responding to it with actions (life).