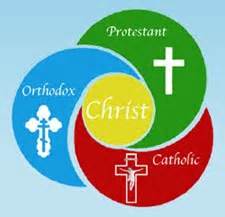 There is great confusion today when it comes to the word unity. In religious conversation, this word has become one of the main topics of discussion. Whether between two completely different religions like Christianity and Islam, or between two religions of similar background like Protestantism and Catholicism, there are many who are using and promoting unity. Another word being used is ecumenical which is a synonym for unity.

The term has gained popularity lately as it is being proposed as the solution to wars, violence, conflicts, and division which are said to be caused by different religious beliefs. The assumption is that if all religions would seek unity, then we could have peace in this chaotic world. While this might seem like a noble pursuit, there are enormous problems with this philosophy.

First of all, the premise of the idea is wrong from the beginning. Wars, fights, conflicts, and division all occur, not because of religion, but because all people are sinners, and we seek to live out our selfish desires (Jeremiah 17:9, Romans 3:23). We as human beings want our own way and when our will conflicts with another person’s, fights begin. When conflicts are between those who have a lot of power, wars begin. The root of the problem is at the core of the human heart, our sinfulness. In Genesis, we see this problem express itself right after the fall. Adam and Eve’s son Cain killed his brother because of jealousy. At that time, there was only one faith, one religion. The world’s problem is human selfishness, and the only solution to that problem is to have it fixed by the one who made us, the Lord. And He sent the solution, His Son.

The second problem with the philosophy that all religions should seek unity is that it assumes that every belief system is practically the same and that they all lead in the same direction, but from different starting points. Not only is this philosophy false, but even the religions themselves confess that this presumption is not true. On the foundational level, Christians and Muslims do not agree. Islam is very clear in its teachings that Jesus was not God. Christianity, on the other hand, unapologetically proclaims that He is God. Christianity is based upon the belief in the resurrection, while Islam denounces it altogether. When you compare with other religions, you come to the same conclusion. On a foundational level, a Christian cannot agree with a Muslim unless they stop being a Christian.

A third point that is very important to bring up is: divisions are necessary in order to follow truth. The fact that truth exist can only lead us to conclude that falsehood does as well. When we say something is true, we are claiming that something else is false. When we say that 2+2=4, we are also saying that all other answers are false. If someone wants to follow what is true, then they must at the same time separate themselves from what is false. Jesus said that He is the truth, and there is no other (John 14:6). So when a person says they believe in Jesus, they are at the same time saying that all other “roads” are false. To be a Christian means that you believe that Jesus is true and all other beliefs are false. True Christianity leads us in no other direction.

So we must conclude that unity among religions is philosophically impossible, and those that promote this kind of unity are promoting something that is wrong right from its foundation.

But someone might argue, “Ron does not the Bible talk about unity?” Yes it does. It even commands it. But, we must be clear what kind of unity the Bible calls us to. Biblical unity is the unifying around the same Spirit and the same truth. Unity that is taught in the Bible is not one where everyone lays aside their doctrinal beliefs for the sake of joining hands and worshiping God together. Actually, this kind of compromise is condemned in the Bible (Galatians 1:6-9; Romans 16:17-18; 1 Timothy 6:3). When we lay aside biblical doctrine for the sake of unity, we are not worshiping God, but an idol. When we give up biblical truth to unite with those of other faiths, we form another god in our own image. This is not worship. It is idolatry.

The point of the title of this blog is to talk about something that I believe needs to be clarified. There is a enormous difference between respect and unity. The Bible calls us to unite with those of the same faith. It also calls us to love other people. Therefore, I can respect someone who has completely different religious beliefs than me. I can respect them as a person, created in the image of God. I live beside them, live in the same community as them, shop in the same stores as them, and let my kids play with their kids. Respecting them in this way, maintains the biblical truth that God created them and loves them and sent His Son to die for them. Because of that truth, I want to live in such a way that will help them see and understand that they must abandon their false beliefs and trust in Jesus Christ alone for their salvation. I respect them as people for the sake of the gospel and for the worship of Christ.

Currently in my region, there is a conversation that is gaining tons of popularity. This conversation is encouraging the evangelical churches to join in unity with the Roman Catholic church by confessing that we are in fact part of the same body, believe the same truth. The argument being presented for this ecumenical movement is that we both worship the same God and use the same Bible. It is even being promoted that we should leave our doctrinal differences aside for the sake of this unity. There is great pressure to work with the Catholics since (according to the ecumenical movement) we are really the same church. On a superficial level it sounds wonderful and beautiful. But be very careful and think very clearly, for there are several reasons why this cannot work and should not work.

So where does this leave me as a believer, and as a pastor of a local evangelical church? It is rather simple. I respect my fellow Catholics. I have many Catholic friends. We get along very well. But at the same time I cannot with integrity to myself and to God’s word think, encourage, or promote the idea that Catholics and Protestants believe the same thing. That simply is not true. We may both say the words “salvation, Jesus, God, Bible, church, faith, grace”, etc. but when we say them, we are not talking about the same thing. I seek to define my beliefs by only what I find in the Bible. I believe the Bible is God’s word and is trustworthy on every level. And, I have good reasons to believe this, but that is for another blog post. I personally do not care what a “saint”or pope in the past decided how the doctrines of the church should be changed. They do not define my beliefs, God’s word does. So, I want to encourage my Catholic friends who really do want to know God and follow Him to abandon anything and everything that is not according to the Bible. God is to have the authority over the church and our lives, not sinful man. I respect them and love them enough to say it in a loving and respectful manner.

Now, with me saying this, I realize that it will go against the flow of popular culture and religious culture in my area. But, for me integrity is more important than popularity. If I say I worship God alone and trust in Him alone, then the only conclusion I can come to is to trust in His word alone. Those that are promoting the unity between the evangelical and Catholic church will probably think that I am working against the gospel. But we must ask, what is the gospel, and who is really promoting it? If the evangelical church compromises and embraces the Catholic church as a true and biblical church, then it will leave the gospel and embrace another. Do I believe there are believers in the Catholic church? YES! But, it is not because the Roman Catholic church intentionally led them there. But, if they want to follow Him, then they should abandon the lies that they have been taught, which are nothing more than demonic propaganda being hidden by a Christian mask. If they want to follow Jesus, there is no other conclusion to come to. A follower of Jesus can never be okay with false doctrine.

This leads me to one last point. Doctrine. Many do not like that word. Most have no idea what it means. The promoters of the ecumenical movement between Catholics and Protestants think it needs to be ignored. But, the church is founded on doctrine. The church is to teach it (Titus 2:1). The church is to promote it (1 Timothy 3:15). The church is to confront false doctrine (1 Timothy 1:8-11). We are the church because we believe certain things, and those things come from the Bible. Doctrine is not optional for the believer in Jesus. It is vital and fundamental. The reason we embrace certain things and reject others is because we have believed biblical doctrine. To put doctrine aside for the sake of unity is to put aside the only thing that gives us a reference point for unity. We are to unite on the truth of God’s word. So we must know it, teach it, keep it, and guard it (Jude 3-5).

In conclusion, I respect all people of all religions. I do not want to fight with them. I want to live in peace with them. We have all been created in the image of God in order to worship Him. He has revealed Himself to us by His Son Jesus. Because this is true, those that believe in other things need to be told what God has said in His word. It needs to be done with gentleness and respect (1 Peter 3:15), but it needs to be done. Will that cause division? Of course it will. Jesus came in order that this division would take place (Luke 12:49-52). Will it cause fights, wars, and conflicts? Unfortunately yes. But, this is because we are sinners, not because following Jesus is bad or evil. We are quick to point the blame of wars on religion and God, when people are the ones pulling the triggers. And this is another proof that what we need is not unity, but a Savior. And God sent One (John 3:16)