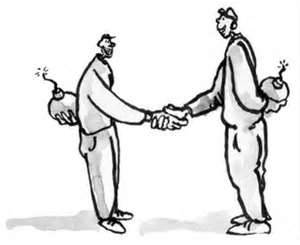 I have heard several good pastors-teachers lately talk about the issue of division within religion in general, as well as in the church. Whether for good reasons or not, I have heard many people ask the question, ‘when do I know that I should leave a church?’ While most of the time this is a loaded question because the person does not really want to know the answer, but has already decided to leave and is looking for a justified reason, I still think an answer should be given. So, here is my take on it. My thoughts on this are not original. I fall in line with the several others pastor-teachers that I have listened to and read.

The layer of truth is a dividing line that many in today’s world try to erase. Many good intentioned people will say that all religions are the same, and all lead to the same place. While said with a sincere desire to see more peace and less war, the comment itself is founded in ignorance. The dividing line between different religions is there for a reason. The reason is that each believes, teaches, and practices completely different, and even opposing, beliefs.

To illustrate this we only need to look at a few examples. Islam teaches that Jesus was only a prophet. Judaism rejects Jesus altogether. Jehovah’s Witnesses teach that Jesus is an angel. Mormons teach that Jesus was Lucifer’s brother and that God used to be a man on another planet. Hindus do not teach about Jesus at all, but it consist of hundreds and thousands of gods. Buddhism teaches that people are in some way god. Atheism/Humanism does not believe in God at all. But, Christianity teaches that Jesus is God based on the fact that He rose from the grave (a feat only God could do) 3 days after being crucified on a Roman cross in order to take the punishment for sinners. As you can see, just on the issue of the person of Jesus, there are major dividing lines, and they are firmly set. And this only deals with the person of Jesus. There are many other truths that cause dividing lines between all these and other religions. To understand the reality of this dividing line simply takes someone willing to look briefly at the foundation of each religion. Those that claim all beliefs are equal and the same either have not taken the time to explore what each religions says, or they ignore the absolute statements & beliefs that each holds to.

Another example of a dividing line as it has to do with the layer of truth is the line between the Roman Catholic Church and the Protestant and Evangelical Church (those who sometimes refer to themselves as “born-again”, according to John 3:3. I am in this group). This is a line that has become confusing among many on each side. Both believe in Jesus, and that He is the Son of God. Both use the Bible, and believe it is divine Scripture. Both believe in the crucifixion and resurrection of Jesus. So where is the line drawn? It is drawn in many places, but I will not take the time to illustrate them all. But the major line has to do with how one receives salvation and eternal life. Catholics believe one achieves salvation by God’s grace through church sacraments (baptism, confirmation, weekly or regular communion, marriage, and last rites) performed in the church. Evangelicals believe that salvation comes from one’s faith in Christ alone. This dividing line is supported by another line between the two. Catholics believe in Scripture as well as church tradition, and the two are equal. Evangelical Christians believe in sola scriptura, or in Scripture alone. Evangelicals do not believe the church has the right to change or add to what God has revealed to us in the Bible. Catholics believe the church does have that right. This difference is the reason Catholics pray to Mary and saints, believe the pope is infallible and a descendent of the apostle Peter, believe in purgatory, indulgences, as well as many other church practices. None of those things are in the Bible, so Evangelicals reject them, and is the major reason that 500 years ago we had what is known as the Protestant Reformation.

So, layer one has to do with truth. This dividing line is a good one. It helps clear the fog that our post-modern society today tries to create. The dividing line of truth should not change the respect one person in one faith should have for someone in another. But, it does clearly show that people fundamentally believe different things. I want to finish writing about this layer with one truth I believe dearly: there is only one truth. This is a foundational belief that the Bible clearly states (John 14:6).

The next two layers I will write about are within the Evangelical Christian Church. One dividing line is good, and one is not. The second one I call the dividing line of doctrine. It is the good one. Within the Evangelical church there are foundational beliefs that I call major beliefs, and then there are beliefs that I would call minor beliefs. Major beliefs include things like the deity of Christ, salvation by faith in Christ alone, literal death, burial, and resurrection of Jesus, the trinity, Bible as God’s inerrant word, a real heaven and hell, etc. Within the Evangelical church there is great unity on the major beliefs. This is what holds the church together. But, the fact is, is that there are dividing lines that do exist within this great unity. These lines are drawn due to differing doctrinal beliefs on minor things, or things that do not change the message of the gospel. I admit calling them minor may not be the best since word to use since the ones that I will mention below are not minor in any respects. What I mean in minor is that they are not tied directly to salvation. One could be on either side of the line and still hold a biblical view of salvation.  Some of these divisions are what have caused the creation of denominations. An example of a doctrinal divide is that of infant baptism. Some churches, like the Presbyterians, baptize their infants, while churches like mine, a Baptist church, do not. Most of your Charismatic churches would stand with the Baptists on this issue. All groups are considered evangelical and promote salvation in Christ the same. This is what brings them together. But due to differing doctrinal stances on baptism, there is a divide. We are brothers and sisters in Christ, so of the same family of God, but disagree about some doctrines like infant baptism, so we do not worship regularly together.

Another example of a doctrinal difference within the body of Christ is that of speaking in tongues. Charismatic churches differ in their understanding of speaking in tongues in the Bible than that of the Baptist or Presbyterians. There are even differing stances within the Charismatic community. How one stands on that issue does not determine whether or not they are Christian or not (unless a church or group of churches requires speaking in tongues in order to have salvation. This would be adding to faith in Christ alone). I actually think this issue should be less of a dividing line than it is. I have several that are members of my church that previously were a part of the Pentecostal Church, which is a part of the Charismatic community. I would teach differently on this issue than a Pentecostal would, but that does not change the fact that we are both proclaiming the same gospel, faith in Christ alone.

The dividing line of doctrine are good divides (for the most part). It is important that Christians have strong convictions about different doctrines. It is important that each follower of Jesus search the Scriptures, ask the Spirit of God for help in interpreting, and draw doctrinal stances on things like baptism and speaking in tongues. Another issue that I think fits into this layer is: allowing for women pastors or male only pastors. These divides are healthy. While Christians are to show love toward one another, they are also to stand firm in the word of God. Biblical convictions are necessary. Thus, we have divides within the church. We all hold to the necessities of the gospel, so are one spiritual family, but differ in some doctrines.

The last layer that I will mention is the dividing line of practice. This is not a good dividing line. I would even go to say that to divide on any of the issues that I will mention below are not only bad, but are sin, and an offense to God. Unfortunately, too many Christians are willing to divide on these issues. Actually, I would call this dividing line the “Achilles Heel” of the Christian church and is what the devil uses the most to quench our influence of the gospel on a broken and needy world. Here are many examples of dividing lines within this layer: celebrating certain holidays (Christmas, Easter, Valentine’s day, Halloween, etc.), kind of worship music played in church, going to theaters or not, choice of schooling, version of Bible used, using contraception, single pastor or multiple-elder leadership, head-coverings, working vs. stay at home moms, free-will or election, end times views, etc. There are more examples, but I have to stop somewhere. I believe for Christians to divide over any of these issues is sin. When I say divide, I mean if believers who hold to different opinions on these issue cannot worship together, then something is very wrong. That means the issue is being elevated above the gospel.

Get the point? All should be a part of one church, or at least working so close together that the average person cannot tell them apart. It is OK to have personal convictions on all the issues I stated? Absolutely. Actually, I think it is imperative that we search the Scriptures to try to find out how God stands on these things. But, followers of Jesus who come to different conclusions on these issues should be able to worship, serve, fellowship, and study the Bible together. We should be able to hold to our spiritual convictions and still be close together. Due to the influence of my fellow church members, I have actually shifted some of my views on some of the issues above. I could never do that if I was willing to divide because of them. I am actually re-thinking my stance on end times, and considering shifting my position. As members of the body of Christ, we are commanded to build up the faith of others (edify). We should be able to have strong biblical convictions that differ and still be unified. When I say unified, I do not mean existing in the same church. I mean being able to sit together and have a sincere and deep conversation and praying together (even about the issue of disagreement). Romans 14 helps us here.

So, the main principles we need to embrace here are at least two. First spiritual maturity – knowing the difference between the 3 layers of division and knowing how to respond to each. The second principle would be humility. No matter who you are talking to, someone in layer one, two, or three, the attitude to have is humility. This does not mean that you must compromise truth in layer one, give up specific doctrine in layer two, or not have biblical convictions in layer three. It just means that there is a way to go about displaying and proclaiming your faith. And, I think the layer that needs the most improving is the third. Like I said, some dividing lines are good. But not in the third layer.